With wildfires threatening homes, private and public property and even a ski area, Washington Technology Solutions (WaTech) staff are working behind the scenes to help battle the blazes.

The declaration of a state of emergency for all Washington counties by Governor Jay Inslee means that the state's Emergency Operations Center (EOC) at Camp Murray south of Tacoma is in full swing. That also puts WaTech emergency preparedness staff in action as one of the primary agencies for what is known as "Emergency Support Function 2", or ESF 2. 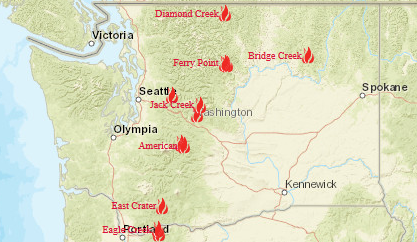 ESF 2 provides guidance for alerting and warning state and local jurisdictions on technology issues related to a disaster. ESF 2 agencies also provide advice on telecommunications and information system capabilities necessary to meet operational requirements during an emergency and for recovering from a natural disaster.

The agency has supplied one staff member to the EOC in recent days, but others may be recruited to help too according to Dan Mercer, the agency's chief techology officer who is also over emergency management.

WaTech has other technology roles as well, Mercer said. "WaTech teams such as Identity Management, Messaging and Network Services provide direct support to the Military Department’s IT division.  In recent months leading up to fire season we worked with the Military Department to ensure they had resilient e-mail services so that the front-line fire teams could communicate."

The agency's telecommunications group in past years has offered up no-cost conference bridge line capabilities to the Department of Natural Resources during the fire season. While DNR has not yet taken advantage of the service this year, the DNR Emergency Fire Line is ready if needed.

Incident managers at the DNR firefighting command centers are using a service set up and coordinated by the Office of the Chief Information Officer to identify buildings and other structures that either are or may be in harm's way. They are using a tool developed by multiple state agencies called Washington Master Addressing Services.

"They basically take a snapshot of the addressing data and bring it to the wildfires with them (along with other relevant GIS data), said Joanne Markert, who coordinates the Geographic Information Systems program for the OCIO. “They then use it to contact landowners as well as to identify the potential impact and look for ways to prevent the fire from getting into residential areas."

The OCIO also coordinates the State Interoperability Executive Committee (SIEC), which has ongoing meetings to address the ability of first responders and local officials to speak to each other on compatible radio frequencies during an emergency such as a wildfire. At the SIEC meeting in June the committee heard from Twisp Mayor Soo Ing-Moody about how difficult communication was in the Methow Valley during the devastating wildfires in that area in 2014 and 2015. The burning of local cell towers during those fires also curtailed priority communications at the time.