To help others manage future critical incidents, Washington OneNet releases the new documentary, SHOTS FIRED, a short film that explores the events of the 2015  North Thurston High School shooting in Lacey, Washington, and demonstrates the need for interoperable communications between schools and responders. Co-presented by the Seattle Documentary Association, SHOTS FIRED premieres at the Northwest Film Forum March 23 at 7:30pm. 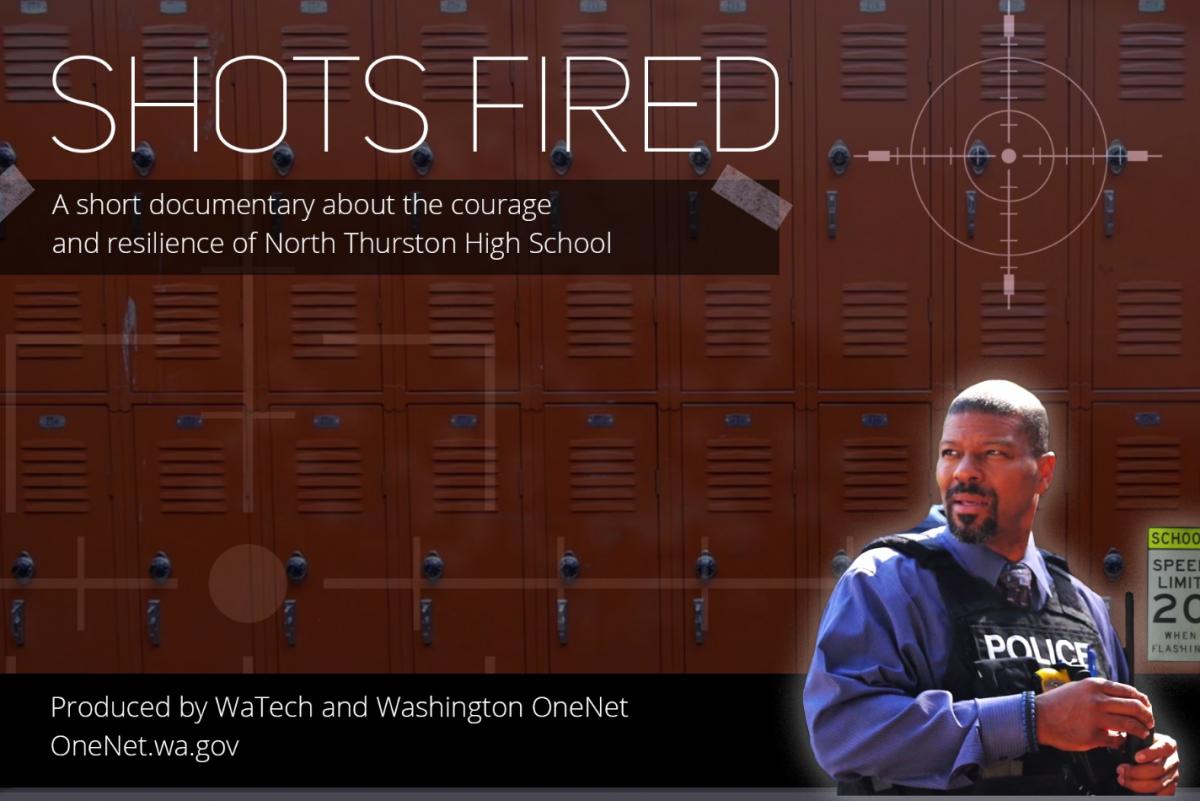 Washington OneNet is pleased to announce the premiere of SHOTS FIRED – a new film about the 2015 shooting at North Thurston High School – set for March 23 at Seattle’s Northwest Film Form and co-presented by the Seattle Documentary Association.

“Washington OneNet’s outreach and education efforts on behalf of our state’s public safety community are exemplary as demonstrated in this thoughtful short film, SHOTS FIRED. The documentary honors the courage and resilience of a community that dealt head-on with an active threat, and makes a new and productive contribution to the national conversation about school shootings. I’m proud of the work of the Washington OneNet team advancing a safer future with communications interoperability.”  Rob St. John, Chair of the Washington State Interoperability Executive Committee and Deputy Director of Washington Technology Solutions (WaTech) and the Office of the Chief Information Officer.

"Washington OneNet’s award winning films are powerful outreach tools to educate first responders and the public about the potential benefits of a data-enabled world where first responders have priority access to wireless networks and applications, like those that will be offered by FirstNet.  The newest film, SHOTS FIRED, reflects on a real critical incident and how the safety of students, teachers and responders may improve in a FirstNet world.”  TJ Kennedy, FirstNet, President

Washington Technology Solutions and the Seattle Documentary Association present the premiere screening of the Washington OneNet documentary SHOTS FIRED at the Northwest Film Forum on March 23 at 7:30pm.

Just before school was about to start on the morning of April 27, 2015 a male student with a .357 Magnum in hand walked down a flight of stairs into the North Thurston High School (NTHS) Commons, an area teaming with students, he raised the gun and fired into the ceiling. Chaos erupted. Then he fired again. What happened next is the best case scenario in the face of such terror.

SHOTS FIRED is a short film that explores the events of the 2015 North Thurston High School shooting in Lacey, Washington and looks at the need for interoperable communications between schools and responders in a critical incident.

“As a parent whose daughter attended the school at the time of the shooting and as the State Point of Contact for FirstNet in Washington, I recognize the critical importance of communications between the public and responders,” said Governor Jay Inslee’s State Point of Contact appointee, Shelley Westall. “Shots Fired is a filmic case study of what worked well and what could have worked better from a communications technology standpoint in dealing with a critical incident. OneNet is committed to improving the public’s understanding of the technology challenges that responders face. SHOTS FIRED will help elevate that conversation.”

The screening of SHOTS FIRED will be immediately followed by a discussion that will feature teacher Brady Olson who tackled the shooter.  The Northwest Film Forum (NWFF) is located at 1515 12th Ave, Seattle WA 98122. Tickets are $7.00 and may be purchased in advance at the NWFF website—nwfilmforum.org—or at the NWFF box office the day of the event.

The Washington OneNet program was created in September 2013 to develop a comprehensive design for FirstNet in Washington state. The program is under the co-direction of the Washington State’s Office of the Chief Information Officer and the State Interoperability Executive Committee (SIEC).  Shelley Westall serves as the OneNet program director and is Governor Jay Inslee’s appointee as the Washington State Point of Contact for FirstNet. OneNet’s priority is to work with the federal First Responder Network Authority (FirstNet) to design a nationwide wireless broadband network dedicated to public safety. Visit OneNet.wa.gov

About the Northwest Film Forum

About the Seattle Documentary Association

The Seattle Documentary Association strives to cultivate a community of high caliber non-fiction storytellers in the Pacific Northwest. Visit seattledocumentary.org.